Color filter curves measured by Materion in Fall 2021. These curves have not been corrected for differences between the Materion test setup vs CGI (f/8 vs collimated; air vs vaccuum). These differences will result in small (<1nm) bulk wavelength shifts and small changes in the filter edges steepness. Modeling efforts of the expected profile changes are ongoing as of mid-January 2022. Out of band transmission is not included in these datasets but is very good; typically <1E-5. Additionally, neutral density filters with OD ~4.75 and ~2.25 will be installed (in the *focal plane* mechanisms; see slides 8 and 11 of Roman-CGI-Reference-Info-Jan2022.pptx)


The dispersion profiles for the Band 2 and Band 3 Coronagraph Instrument spectroscopic prisms. The profile is non-linear, due to the additional constraint that the prisms create no optical axis deviation at a specified wavelength. For additional details see Groff et al. (2021). 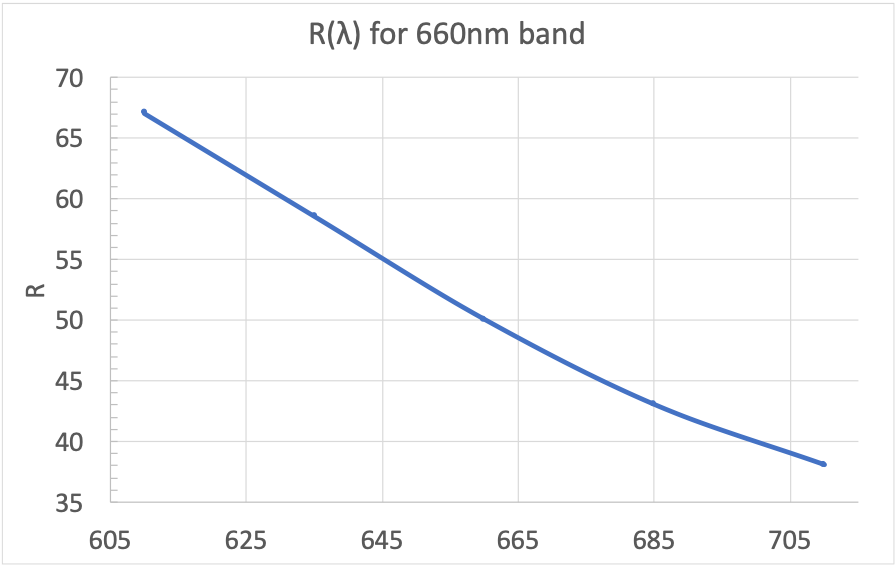 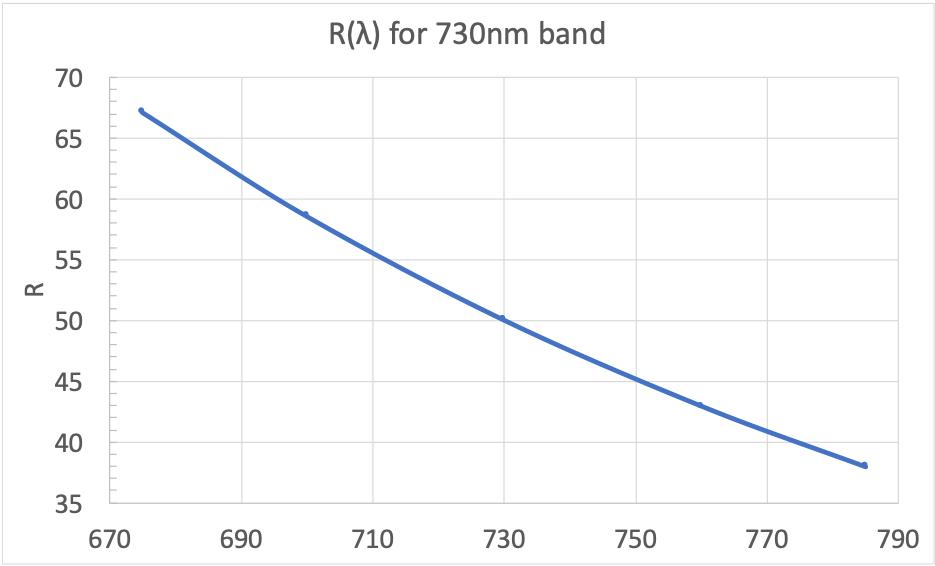 
Roman Coronagraph linear polarization fraction measurements of a target of interest, whether an off-axis point source companion or individual spatial resolution elements within an extended source, will be plagued by different spurious effects that need to be calibrated or minimized by design. Instrument polarization effects are described by the end-to-end optical system Mueller Matrix. The Mueller Matrix describes how the overall optical system turns unpolarized light into polarized light, and modifies the source linear polarization fraction and its orientation. End-to-end optical modeling was conducted by the Roman Coronagraph project team, and resulted in the pupil averaged Mueller Matrices computed at 21 wavelengths ranging from 450 nm to 950 nm in increments of 25 nm.


This graph shows the approximate amount of scattered light from an off-axis star reaching the center of the dark hole, as a function of off-axis star separation. Units are flux ratio per resolution element with respect to the central resolution element (the half-light contour) of an on-axis PSF. The values inside about 7 arcseconds are the azimuthally-averaged on-axis PSF profiles for each of the three main observing modes with the focal plane mask and field stop removed. The assumption is that there is little PSF variability for source offsets less than 10 arcseconds. Values at 45 arcseconds and 100 arcseconds are point estimates of the far off-axis scattered light with no coronagraph masks at 550 nm. These assume that the far-off-axis profiles are azimuthally symmetric and achromatic and ignore SPC pupil mask contributions. A 2016 study suggested that the forest of black silicon cones that make up the SPC pupil masks could produce scattered light with significant azimuthal variation, with far off-axis amplitudes ranging from a few 10-10 (median) to a few 10-8 (worst) depending on the position angle. Given the various uncertainties in the as-built very high-spatial-frequency properties of the Roman and Coronagraph Instrument optics, these far off-axis values should be treated as order-of-magnitude rules of thumb for planning purposes.
This chart replaces slide 21 of Fall 2021 Coronagraph info session "Observing with the Coronagraph Instrument" presentation.